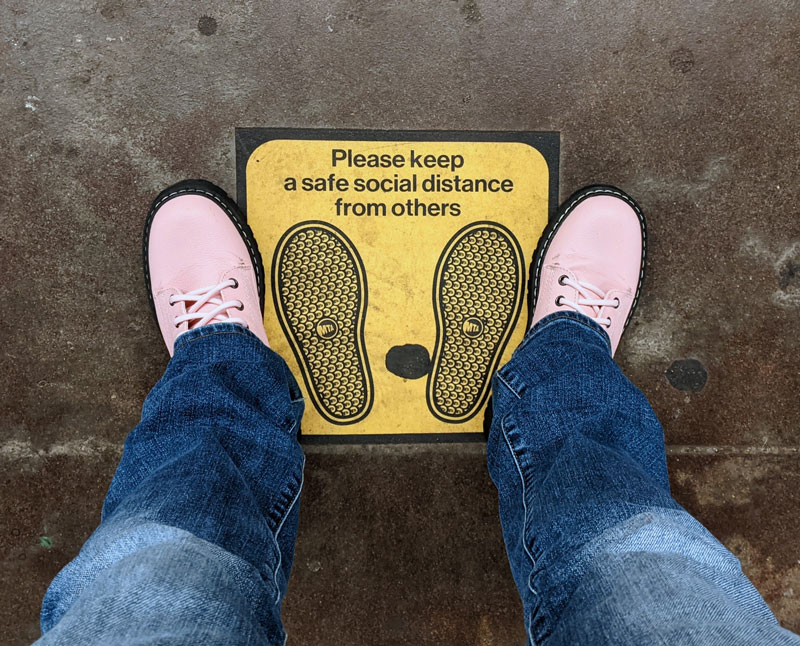 I was on the lower east side waiting for the vegan belt store to open, when a small man with a mustache and his head down approached with a well-rehearsed story: he needed money for food for his family. He wanted to buy a case of peppers.

The usual thing happened. I got uncomfortable, declined to give him money, and he went away.

Strangers asking for money is not strange to me. I’ve lived in or adjacent to major cities for most of my life, and I’ve been through New York more times than I can count. Sometimes I say yes. Sometimes I say no. One time in Minneapolis I was conned. Other times I’ve known it was a con and given people money anyway.

All these countless times, including many that recent weekend in New York, the experience was uncomfortable. As the small man walked away with his head down, I realized that in all of these countless uncomfortable moments, I had never really thought about the discomfort because it seemed as obvious as the sky. But why is it uncomfortable? What’s in there? What are the components of that particular discomfort?

It looks something like this:
– Guilt about not giving money to someone who needs it, about being repelled by a person in need, about feeling put upon by being approached by someone with less.
– Rage that this situation exists.
– Powerlessness because I can’t fix it or abolish the systems that created it.
– Self-doubt: questioning my own capacity for compassion, questioning my own ethics and moral foundation.
– Dis-ease from being in the presence of other people having their own discomfort about the situation, and from the discomfort of the person asking for money. Dis-ease from an undercurrent of recognition that the system I’m navigating isn’t quite right. It’s all very fragile, as is my place in it.
– And and and.

All of this arrives like an unexpected plop of water on my head on a clear day. (Best not to think too hard about the origin of urban mystery liquid.) Over and over again, drip drop drip, over the course of my life, and especially over the course of that weekend. Crowded cities mean suffering is unavoidable and dense, like everything else. Stop even for a second, and someone will ask for money or food. Move, and you’ll encounter it with every sense, the smell of urine-soaked clothes near a mailbox, the sight of someone sleeping in the shadow of a shopping cart full of trash, the sounds of unintelligible conversations. Drip after drop, wave after wave.

A short time later, we were at an intersection in Midtown. A man in a doorway was having a bad time, yelling, crying, moaning, in the throes of some bad high or low. Drip drop drip. There it is again: my discomfort, the discomfort of the people around me at the intersection, the suffering of the man in the doorway, and a collective desperate hope that the stoplight would change now, now, now, so that we can get away from this thing happening. Drip drop drip. The discomfort became a wave, the wave became a current, and the current was just about to pull me under, when a question shot to the surface:

Where are my feet?

My feet are in my pink boots, on the ground, right now. What do they feel like? Exactly how they feel. Like this. Right now. Here, in this place.

There was nothing I could do about that man’s suffering in that moment, neither directly, nor systemically. There was nothing I could do about the discomfort of the people around me in that moment. And there was no running away from it. All that was really there was a man suffering. It wasn’t about me, and my reaction, and what I am going to do about it, and what is my role, and what perspective can I have about so that I can still feel like a good person, etc. Paradoxically, in that moment of feeling my feet on the ground, “I” disappeared. The man in the doorway became an actual person having an actual experience, not some bit of unpleasant stimuli to which I was reacting.

In an instant in pink boots I got it: what compassion is, and the difference between empathy and compassion. I’ve been reading Standing at the Edge by Joan Halifax, and she dedicates a lot of space to this. Caught up the swell of discomfort, I couldn’t exactly remember her acronym for managing empathic overload, GRACE, but I did remember the first part, Gather Attention (aka Ground), which surfaced from some very smart part of me as an anatomical question.

I lecture on the difference between empathy and compassion in teacher training (grounding, too), but in pink boots I got it at a deeper level, and in one of those embodied ways that you can never really turn back.

Empathy is natural. It keeps us connected to others and keeps us human. It allows us to recognize suffering. Compassion is different. I’ve often thought of compassion as “feeling with,” taking it directly from roots “com” and “pathos.” I thought of it sort of like empathy, but without the rough ride, like a spigot you can turn on or off. Now I recognize that compassion is actually something like “being with or alongside a feeling.” It’s always there if you get yourself out of the way of it.

This understanding is an internal systemic change. As I’ve learned over the past few years, first you tear things down inside, so that you can tear them down outside. Otherwise, it’s like trying fill a leaky tub from a leaky bucket.

Sometimes, what we think are our virtues – our best tools – can get in the way. Empathy is a gift in moderation. Hyper-empathy is a super slippery version of blame-shifting and abdicating responsibility, making me the victim of my own sensitivity to suffering in an unjust world. This is not to say that I’ve lived in a hyper-empathic state 24/7 forever. It’s more a lack of recognition on my part that not only can empathy be turned on or off without losing compassion (or my innate good-person-ness) it must be turned off sometimes to keep compassion flowing. Otherwise, other people’s distress becomes all about me and what I’m sensing, leaving me unable to do much more than be a big feeling-sponge, sucking up everything and sprouting mold. Moldy sponges aren’t much good. Again the paradox: uncontained sensitivity to what other people are experiencing can prevent you from actually seeing them clearly, clearly enough to take appropriate action and be the good person you want to be.

spirituality I guess the past