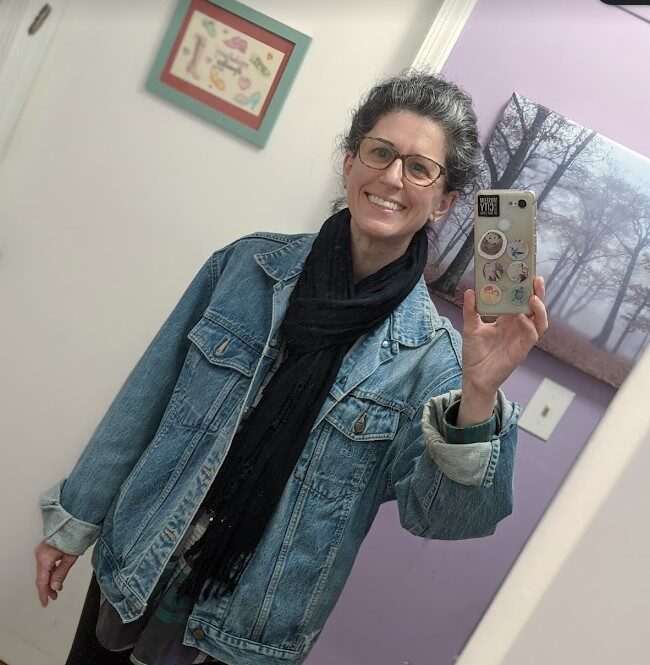 If you had asked me at 11-soon-to-be-12 years old what item of clothing I’d still have at 46, would I have guessed this coat? At 46? An age nearly a decade older than my parents at the time? Maybe.

My mom bought this for me at TJ Maxx in Yardley, PA in late March of 1987. I was delighted. It was too big, but everything was big then, and it was a Guess Jeans coat, a brand that the popular/more happy/easier life kids wore.

This jacket has been through many iterations since then. Early on it held pins that said things like “Livin’ for the Weekend!” or had a smiley face or a Def Leppard logo. Later, pins that said “F the Real World, I’m an Artist,” and a picture of the galaxy safety pinned to the back. There is a loose seam on the pocket where I took off the Guess Jeans logo.

At some point this coat was in a bag of stuff to give away that got stuffed in an old wood trunk that I’d tried unsuccessfully to refinish. The trunk was in the basement of the house I shared with my ex-husband for a year after I moved out because I didn’t have room for it. When I got the trunk back to send to a place for professional refinishing (and return to its rightful owner, my mom), there was the bag with the coat, along with some odds and ends I’d forgotten about.

I considered selling the coat because it’s vintage and too big for me, but now when I put it on I think about time and I think about David Byrne’s big suit. I think about how that suit was inspired by Kabuki theater, by the idea of exaggerating scale and scope of everyday clothing items as an art form, as way for them to be seen in performance from afar, as a way of establishing identity.

The coat doesn’t have any pins on it anymore, just a loose seam on the pocket, some long since filled-in pinholes where the fabric re-established itself, and of course my form.